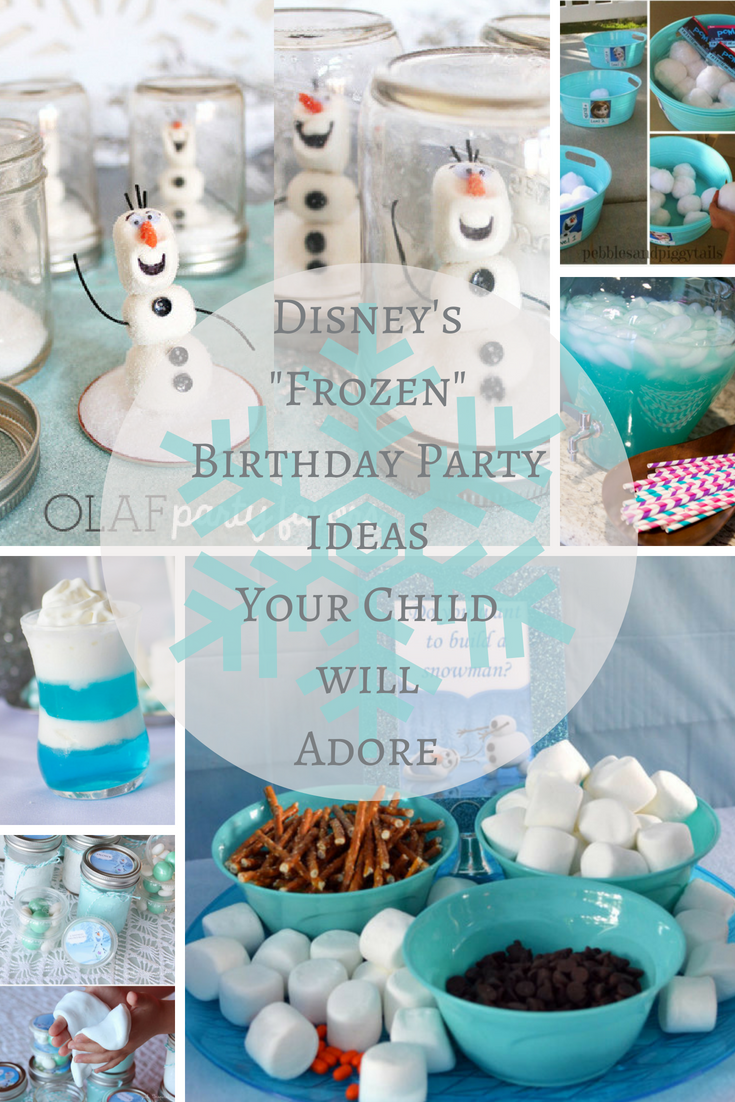 There are so many great DIY Frozen birthday projects out there. Cakes, games, and decorations, it’s easy to save money and have fun with family putting your own personal spin on Frozen.

If you’re a grownup planning a Frozen-themed birthday party, we bet you think you know everything there is to know about the movie Frozen, right?

Here are three fun little-known facts about Frozen before we get to the birthday goodness:

Duncan Hines calls this their “Signature Blue Velvet Cake Mix” but we all know it was pretty much made for Frozen! Just add eggs, water, and butter for a light, moist, very yummy cake! Just buy white colored frosting for the outside – vanilla, buttercream, cream cheese – any flavor goes great with this cake! Buy a small Elsa figurine from a dollar store and candy letters for the name and voila! The easiest birthday cake ever.

Do You Want To Build A Snowman? Snack Set

Kids are funny! They take a bite out of a snack and leave the rest, or pick them apart and only eat the raisins or marshmallows. That’s why they’ll love this snack set! Eating parts of a snowman will make them giggle, and they can grab their favorite part and leave the rest for their friends. Plus it’s a wonderfully inexpensive but cute way to provide snacks at the party.

Frozen mocktail drinks are grown up meets kid-friendly in a pretty, magical, fizzy way. They’re so easy! Simply freeze water in a few snowflake-shaped ice cube trays before the party. When you’re ready to serve, be sure to use clear glasses so everyone can see the magic happen. Put the frozen snowflake ice cubes in first. Next step, add some blue cotton candy, pour water and watch an amazing transformation that’ll make everyone oooh and aaah. And yes, you can add a splash of vodka to yours and make it a Frozen cocktail, mom and dad. No one will judge you!

Let’s face it, Olaf was the best part of Frozen! His antics can make you laugh over and over again. So what better way to celebrate Frozen than making a DIY Olaf Snowglobe at your birthday party.

Crayola Model Magic is so easy to rolls up in balls for the head and body. Even little hands can do it! Before the Model Magic dried, add hair from thin black cording from the jewelry making section of any craft store. Little hands may need help with that part! Let the pieces dry overnight and then assembled them with pieces of wooden toothpicks to put the head, midsection, and body together, and secure it with a dab of hot glue. This part is best for older kids or grownups. Time for the best part: use some orange felt for the nose, little black buttons, and googly eyes glued on with  Elmer’s glue. Glue white felt on the inside of the mason jar lid, then glue a snowman in. Spoon in some fine fake snow and screw in the lid with snowman upside down. You can do the pre-dry part and assembly before the party, then let the kids decorate their Olafs and take them home!

This fun game is so simple and inexpensive to put together, the kids will go crazy for it! Just use 3 plastic blue buckets from a dollar store, and large pom poms from Amazon or a craft store. You can make 3 levels using Frozen printables.  Get your kids involved in preparation by printing them in black and white and having them color. Tape a line on the ground and let each child have a turn. Give out small favors as prizes or start a “snowball fight” once the kids get bored.

Don’t spend money on expensive helium balloons, especially those Frozen ones you’ve seen a million times. Buy two bags of balloons: white and blue, and enlist the family to blow them up. Tie them together around columns or on a string to make streamers.

If you have the time and energy, you can wrap the string in blue and white crepe paper, or paint the upper half of the balloons with thinned out glue and dip them in a big bowl of white glitter.

This is such a simple dessert to make, but everyone will be talking about your Jell-Olafs! To make these, you’ll need a package of Blue Raspberry Jell-o, a cup of hot water, a cup of cold water, 4 ounces cream cheese, and a teaspoon of sugar. Follow the directions on the Jello box to make the blue Jello. Pour a layer into each glass and quick refrigerate to set. Top it with a layer of cream cheese mixed with a little sugar. Smooth it out and add another layer of jello. Pop it into the fridge. Then top it off with a dollop of whipped cream! Yummy!

What birthday party would be complete without a fun birthday punch! This is easy to whip together with just 5 ingredients:

Mix them together and pour over ice in a drink dispenser. You can put out blue and white paper cups to keep up the festive Frozen theme!

This is a simple game that works well as an Olaf themed addition to any Frozen birthday party. It’s so much fun for the whole family! You just need white cups, black and orange construction paper, craft pom poms, glue, scissors. Pull in the kids to help make this game before their party.

Decorate six white cups with noses, eyes, and mouths out of construction paper with glue and scissors. Pull out your best Olaf making skills! Then make them into a pyramid to hit with the pom poms. Keep a small basket with little favors to win if the kids knock over all the cups. Keep playing until the favors run out!

This is a super fun game for older kids who can read and write and love to play advanced games, like this scavenger hunt! Go to the link above and print the clues, cut them out, and hide them around your birthday venue. Be sure to hide the next clue in the place that answers the previous clue. For example, if the clue is “Love is an open door ” you could hand it to the treasure hunter, and they would find the next clue on a door.

Have the birthday girl (or boy!) help out the children who are stuck and award the prizes for the winner so they can feel extra special about their party!

Frozen Pin the Carrot on Olaf the Snowman

Don’t pay for an expensive “pin the nose of Olaf” game when you can print your own! All you need is a bunch of orange Olaf noses and a blindfold. Put some sticky tape on the noses and give each child a turn. They’ll laugh themselves silly when they take off their blindfold and find noses all over the place.

Gak: a staple of the decade and one of Nickelodeon’s most beloved concoctions, having mucked up the fingers (and surrounding furniture, probably) of the kids that played with it after it came on the scene in 1992.

GAK is so hot right now for kids. What’s old is new again! This is super fun to hand out to kids at the party when it hits a lull. Make it Frozen themed by adding peppermint extract, blue and clear glitter, and blue food coloring (in half the jars) Put them in jars decorate with Frozen stickers and get ready for some serious GAK FUN!

Every store sells tons and tons of Frozen-themed decorations, cakes, and games…it’s easy to spend a fortune on your party. Why spend a ton when you can make your Frozen birthday party unique by doing some of these DIY projects.

From GAK to cake to a snowball toss, it’s easy and inexpensive to prepare your own DIY birthday fun! Get the birthday kids involved in the preparation and they’ll have so much pride in their own creations and learn great lessons on the fun of being a party host. Don’t get hung up on perfection, just choose one or two fun project to enjoy with the whole family!