This post may contain affiliate links – and they simply pay for my coffee!  This post is possible thanks to Mindware, who sent our family Qwirkle to test out!  My opinions are all my own!

The game of Qwirkle from Mindware includes 108 wooden blocks with six different shapes in six different colors , and there’s no board, you just need a flat surface!

Players begin the game with six blocks. The start player places blocks of a single matching attribute (color or shape but not both) on the table. During their turn, each player adds blocks adjacent to at least one previously played block. The blocks must all be played in a line and match, without duplicates, either the color or shape of the previous block. 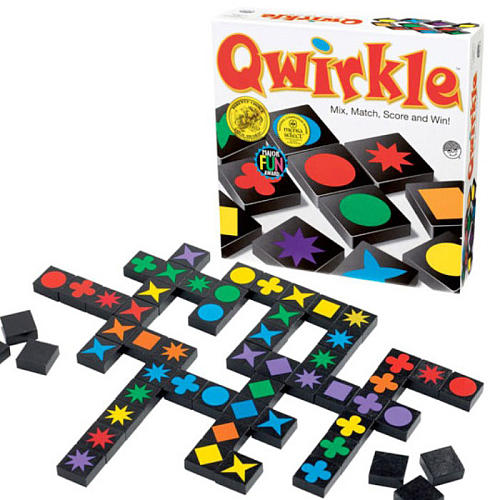 Players score one point for each block played plus all blocks adjacent. It is possible for a block to score in more than one direction.

If a player completes a line containing all six shapes or colors, an additional six points are scored. The player then refills his hand to six blocks.

The game ends when the draw bag is empty and one player plays all of his remaining blocks, earning a six point bonus. The player with the high score wins.

Part of what makes Qwirkle so appealing is the simplicity of the game.   My 6 year old caught on quickly, and while she still didn’t get it all the first few times around, she stuck around through the entire game (which is a win if you ask me!)   Qwirkle teeters between a strategy game and a luck game and is a perfect family board game

(even though the 6 year old made a few mistakes and there was no telling her she was wrong, so we left the mistakes in the game! Can you spot the issues?)

Serious gamers might have a very frustrating time playing with kids under 8 or 9 because if you’re sitting to the right/left of someone who has no strategy it can really screw your game up (or, it could be a strategy to sit “after” them for some people!)

Qwirkle, made by Mindware, can be found at pretty much any retailer!

You can also follow Mindware all over Social Media to see what other amazing games they have!  So fun for family game nights!