Chess is one of those games that everybody knows about, but many people don’t know how to play. It can seem intimidating due to its rather sophisticated nature and history. Even just learning how to set up a chessboard can be a little daunting.

The reality is that anyone can learn to play the game. To do this you need to know how to set up a chessboard and how to move each piece, along with some other rules you must follow to play the game.

Recommended Read: 37 Art Kits – Give the Artist in Your Life the Gift of Creating

How to Set Up a Chessboard

A standard chessboard has 64 squares of alternating black and white. It is exactly the same as a checkers board.

Some manufacturers create specialty chess boards, using different colors and characters for the pieces, such as a Star Wars chessboard or a Harry Potter chessboard.

However, the board will always have 64 squares of alternating colors with 16 pieces for each player, and the basics of how to set up a chessboard remain the same.

The U.S. Chess Federation explains the easiest way to learn how to set up a chessboard is to use a grid format. It is easy to understand and a universal method of stating the locations on the board.

To begin, your board should have a white square in the lower right corner. A common chess saying can help you to remember this: white in right.

Each player will receive 16 pieces in either white or black, for a traditional chessboard. You will receive one king and one queen. You will each get two knights, rooks, and bishops, and you each get eight pawns.

Ranks one and two belong to player one, who is the white pieces. Ranks seven and eight are for player two, who is the black pieces.

Player one will set up his or her pieces starting on rank one, file a, and moving to the right. Put one piece on each square in this order:

Rank two for player one is all pawns, one on each square.

Player two will set up his or her pieces in the exact same way starting at rank 8, file h, and moving to the right.

If you get confused about the order of pieces, always make sure that the queen is on the same color square as the piece, so white on white and black on black.

Now that you know how to set up a chessboard, you need to learn a little about the pieces. Right now, we are just going to focus on how the piece can move.

The most important piece in the game is the king. He doesn’t have a lot of mobility. He can move in any direction horizontally and vertically but only one square at a time.

The queen is the next most valuable piece, and she has a lot of moving power. She can move in any direction horizontally, vertically, or diagonally. She also has no limit on the number of squares she can move.

The rook is somewhat similar to the queen. It can move horizontally and vertically. It has no limits on the number of squares it can move.

The bishop is a little unique. It is can move diagonally with no limits. You will note this means that a bishop will never change the color of the square it is on the entire game.

The knight is often the most difficult piece for beginners because it has an “L” shaped move. It can move two squares one way and one square the other way. For example, you can move it two squares vertically and then one square horizontally. It helps to keep in mind that a knight will always end on the opposite color from which it begins.

Another interesting thing about the knight is that it is the only piece that can jump over other pieces. It won’t capture these pieces, but it is still incredibly helpful. It also is the only back row piece that can move at the beginning of the game.

The pawn is the weakest piece on the board, which is probably why you get so many of them. They are your front line of attack. The pawn can only move forward and is the only piece with this restriction.

There is something special about a pawn. When capturing other pieces, it can only do so diagonally and is the only piece that doesn’t capture the same way it moves.

Chess may seem complicated and difficult to learn, but it is not too tough. In fact, it can make a great summer activity for kids who need to find something to do besides look at a screen.

The goal of the game is to get your opponent’s king in checkmate, which means you can capture the other player’s king because he or she has no moves that will stop you from doing so.

To play, you want to remove as many of your opponent’s pieces as possible to make his or her king vulnerable. At the same time, you need to protect your own pieces so they can protect your king.

White always goes first, according to How Stuff Works. The first move can only be a pawn or a knight. Once you remove your hand from the piece you move, you cannot redo your move. The only exception to this rule is if you put your king in check because that is against the rules. You can skip a move, but you cannot skip a move twice in a row.

You will work towards putting your opponent’s king in check. This means that you are in a space where you could capture the king on your next move. Your opponent will then get a chance to move his or her king out of check. If he or she cannot, then you have checkmate and win the game.

There are a few ways to get out of check. You can either move the king out of the range of the piece holding it in check or capture the piece that has it in check. You can also block the check by moving another piece into the way, which will result in your opponent capturing it instead of your king.

Once you start playing, it isn’t too tough to get the basics down. The real fun of chess is learning strategy and special moves. You may want to think about adding “learn how to play chess” to your summer bucket list because trying to master this game can take a long time. 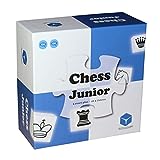 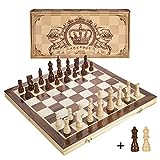 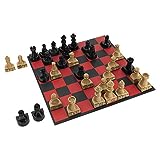 There are a few special moves that you can make in chess:

You can only use this move if:

Pawn promotion occurs when the pawn moves to the other side of the board in the last rank where it can no longer move.

At this time, the pawn can become any other piece, except the king. Usually, the choice players make is to make it another queen.

En passant or in passing can occur on a pawn’s first move of two squares. This situation occurs if your opponent moves his or her pawn two squares on the first move, but if he or she moved it only one square and you could have captured if it. When this happens, you can capture the pawn.

These special moves add to the complexity of the game, but there is also an element of strategy to chess. If you want to become good at the game, then you should study chess puzzles to help you think about potential moves.

Final Thoughts on How to Set Up a Chessboard

Chess can be a lot of fun, especially if you are someone who likes strategy and puzzle games. It can seem both complex and simple at the same time, which is why it is such an intriguing game.

Once you learn how to set up a chessboard and the basic rules, you have the opportunity to refine your skills and become a master of the game.

Do you have any tips for new chess players? Tell us about them in the comments below!